Looking for protection against inflation or recession while getting paid to wait? Here are a few options to seriously consider.

The case for buying precious-metals and miners was recently made here, and now it is time to share our favorite trades.

Gold has been like a kite caught in an unrelenting storm for the past 10 years; flying to extremes ($1900) on wind streams of economic collapse, monetary expansion and Brexit then dovetailing lower on Wall Street’s sporadic hopes of normalization. For the better part of the last 4 years, Gold has been consolidating and trending lower but with Donald Trump about to usurp the throne, the glory days may soon return with a vengeance.

The prices of precious-metals have been unstable to say the least, so it was unexpected when we dug into the dividend paying history of gold miners. Not only have dividends remained stable throughout this volatile decade, a couple have grown dividends. Not all miners are created equal and few investors understand the differences.

Franco-Nevada Corporation (FNV) and Royal Gold (RGLD) both have one of the highest dividend yields in this industry, 1.5% and it has been stable throughout. RGLD has increased dividends almost every year for 15 years straight, with an annual compounded growth rate of roughly 20% – right through the precious-metals downturn. If gold has a sustained rise in price as we expect, dividends could triple in these names.

The main reason why FNV and RGLD can pay out such a decent dividend is due to their business model. Both are royalty streaming companies – they invest cash into other miners which gives them the right to gold and silver at locked-in low prices in the future. This allows for a high degree of predictability in cashflows which in turn allows for higher dividend payouts.

A 5-10% allocation to these FNV and RGLD are attractive at current prices.

For those who want more upside if prices of precious metals are to appreciate significantly, we quite like SSRI, AEM and NG. There are no dividends here but these are rare gems as they capture the most upside during rallies in gold. Because of operating leverage, miners generally capture 2x of the upside in gold and these names capture even more upside compared to peers.

Other alternatives include ETFs which provide exposure to the entire sector thereby reducing individual company risk. The precious-metals sector is split into roughly into two: the established miners who have proven reserves and stable cashflows (senior miners) and the exploration miners who have much higher risk (junior miners). GDX tracks the seniors and GDXJ tracks the junior miners.

Since individual company risk is less of a concern, buy and hold investors who want to aggressively hedge inflation risks or participate in the coming gold rally should allocate greater than 10% of their portfolio to GDX/GDXJ. Again, the current pricing is attractive in our opinion.

How can I participate with options?

Let’s say you’ve established that 1,000 shares of GDX is the optimal position you should have you’re not sure that the timing is optimal. You can consider selling a put around the 18 strike for expiration in March and buy 500 shares of GDX outright.
We believe $18 is a major resistance area for GDX since even the strong optimism for rising interest rates and dollar did not push GDX below $18 recently. 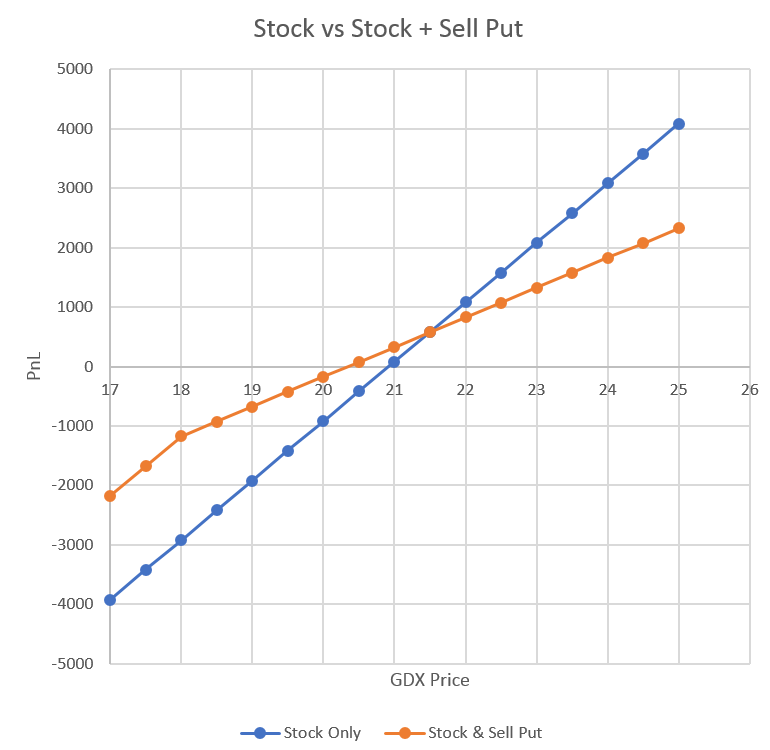 Buying the stock only gives a more aggressive payoff structure and would be the best bet for those who are outright bullish on the timing and direction. For those who think gold may take a bit of time to get going would be better off with buying the stock and selling some puts.

There are of course other ways to structure a bullish bet on gold – these include: bull put or call spreads, buying calendar spreads and outright call buying. Many strategies allow for very structured profit and loss charts where the investor knows exactly what their maximum risks/rewards are.

Until next time, Happy Trading!